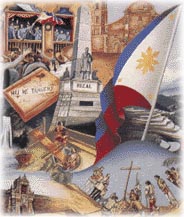 The Philippines, in a nutshell


Welcome, thanks for dropping by! This website is mainly dedicated to provide basic information and insight into the Philippines, it's people, culture and languages. The site mainly covers the basics of Tagalog (the country's national language) and Visayan (to name just two of the more than 170 languages spoken all over the islands). The use of Spanish in the Philippines as the original official language of the country for more than three centuries, has significantly declined. Currently, only a few Spanish Mestizo families speak it as their first language, though some still use it together with Tagalog and English. The use of English language in the Philippines is contemporaneous and is America's visible legacy. The most commonly played sport in the Philippines is basketball. There is also a wide "imitation" of American cultural trends, such as the love of fast-food; many street corners boast fast-food outlets. Aside from the American commercial giants such as McDonald's, Pizza Hut, Burger King, and KFC, local fast-food chains have also sprung up, including Goldilocks, Jollibee, Greenwich Pizza, and Chowking. Modern day Filipinos also listen to contemporary American music and watch American movies. English remained the language of government and businesses for some time. In today's setting, you'll find that most Filipinos speak in "Taglish", a combination of Tagalog and English in their everyday lives. The Philippines is the fifth-largest Christian nation, after the United States, Brazil, Mexico, and Russia. About 90% of all Filipinos are Christians: 81% belong to the Roman Catholic Church, about 5% belong to various Protestant, and another 4% from local Christian groups. Although Christianity is a major force in the culture of the Filipinos, indigenous traditions and rituals still affect religious practice. Approximately 5% of Filipinos are Muslims. They primarily live in parts of Mindanao and the Sulu archipelago. Most lowland Muslim Filipinos practice normative Islam, although the practices of some Mindanao's hill tribe Muslims reflect a fusion with animism. The Muslims have resisted conquest and conversion for centuries by the Spanish and the Americans. Various Muslim groups have been waging a decades-long armed campaign against the Philippine government for political self-determination. There are also small populations of Buddhists, Hindus, and Jews, which, along with other religious groups, collectively comprise 5% of the population. Filipino culture is largely a fusion of the indigenous traditions of the Philippines, with the Hispanic and American cultures. It has also been significantly influenced by Chinese, Indonesian and Indian cultures. The Hispanic influences in Filipino culture are largely derived from the culture of Spain as a result of over three centuries of Spanish colonial rule through Mexico City. These Hispanic influences are most evident in Roman Catholic Church religious festivals. Filipinos hold major festivities known as barrio fiestas to commemorate their patron saints. The most visible Hispanic legacy, is the prevalence of Spanish surnames among Filipinos. This peculiarity, unique among the people of Asia, came as a result of a colonial decree for the systematic distribution of family names and implementation of the Spanish naming system on the inhabitants of the Philippines. A Spanish surname in the Philippines doesn't necessarily denote Spanish ancestry. But there are many other traces of Spanish culture in the country, such as names of countless streets, towns and provinces, which are also named in Spanish. Filipino cuisine is also heavily influenced by Spanish cuisine. The Chinese influences in Filipino culture are most evident in Filipino cuisine. The prevalence of noodles, known locally as mami, are a testament of the Chinese cuisine. Other Chinese influences include linguistic borrowings and the occasional Chinese derived surnames. In spite of these, native moral codes, respect of family, veneration of elders, and friendliness, all remain intact. Filipinos honor national heroes whose works and deeds contributed to the shaping of the Filipino nation. Jose Rizal is the most celebrated ilustrado, a Spanish-speaking reformist visionary whose writings contributed greatly in nurturing a sense of national identity and awareness. His novels Noli Me Tangere and El Filibusterismo originally written in Spanish, are required readings for Filipino students, and provide vignettes of colonial life under the Spanish rule. They give a sense of Filipino identity and historical continuity. Ninoy Aquino, the charismatic leader against the Marcos dictatorship, is a highly revered martyr of the People Power revolution. As with many cultures, music and leisure activities are an important aspect of the Filipino society. Various sports are also enjoyed, including boxing, basketball, badminton and billiards being popular games in the country.